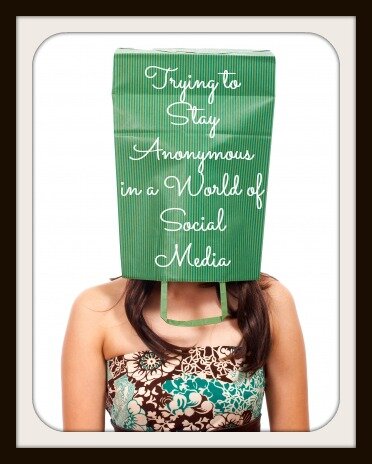 Social media is a funny, ridiculous thing that all bloggers need to function in the world.  I hate to say that, or even admit it to myself.  If it weren’t for my blog, I would never be on Facebook, Twitter or any other form of social media.  Though I’m sure there are plenty of bloggers in this world that are extroverts who love to interact with the world, I’m very much so a hermit.

It’s the conundrum of being a blogger for me.  I put my whole life on display for the world to see, and you can’t have interesting posts if you don’t experience life, but I don’t like to leave the house if I can help it… So, I have social media, and, on the one hand, it allows me to interact with the world and on the other it is something that I don’t always love.

My main issue with social media is that I am an anonymous blogger, and social media doesn’t want you to be anonymous, they want your information.  They want your stats so they can use it to target you with ads, target others with ads and generally use you as the commodity that gets them money.  But many of us have anonymous Facebook accounts anyway.

Google Plus wouldn’t let me sign up; they said my name wasn’t real and that I had to use my real name.  They have an appeals process, but said up front that that was only if you could prove that the name you were trying to use was real.  Well, then G+ doesn’t want me that badly.  But Facebook?  Well, they have always been much more lenient.  So I have a Facebook account that runs my Fan Page.  It allows me to be friends with my bloggy friends without giving away too much personal info and I can join groups and such without worry.  That is, until Facebook locked my account for not having a real name. Technically, that has always been the rule, but they had never enforced it really.  But now, all of my other anonymous friends and I have to rethink how we are going to stay anonymous, but still be able to connect with everyone via social media.

Twitter is kind of the last frontier.  They don’t care who you are as long as you use their service.  We’ll see how long that lasts.  But for now, you are looking at the “face” of Jane Bloggs, a play on the UK version of John Doe.  I suppose, now that I’ve outted myself, I’d better hope Facebook doesn’t read my blog…

To me, it’s an interesting situation to be in.  In this day in age, it’s getting harder and harder to be anonymous.  As a blogger, we rely on social media to help our readers keep in touch, but as an anonymous blogger, it’s getting harder and harder to utilize social media and still maintain that anonymity.  Now that social media has turned into a business of selling people to businesses and not the other way around, our personal information has become extremely valuable.  As a result, anonymous users are slowly becoming a thing of the past, as Terms of Service are more and more often requiring the use of your real name.

Remember when social media began and was just a means of keeping in touch with people?  Yeah, me neither.