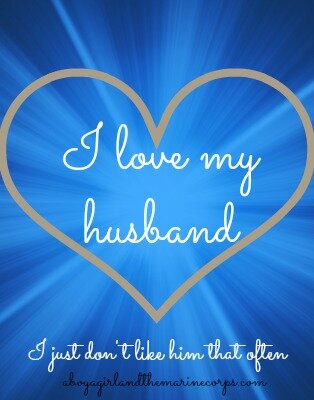 I love my husband.  If I didn’t love him I wouldn’t have married him and definitely wouldn’t put up with living with him.  We are polar opposites in the way that magnets repel each other when you have them flipped on opposite sides.  We have nearly nothing in common.

The saving grace in our marriage is laughter.  My husband makes me laugh and he finds me pretty ridiculous too, though I will admit that I am a constant embarrassment to him.  While I may be socially a bit shy in new settings with new people, I do tend to say things that others might find off-putting… and I have ZERO shame when somewhere I’m comfortable.

But we laugh and find the same things funny, which means that if we aren’t laughing, we are often bickering.  We hit the old people bickering stage really early in our dating life.  Somehow, we have always made it work though.

We don’t communicate the same way, which means that I spend a lot of time looking at him completely puzzled.  He also mumbles and I’m hard of hearing (have I ever mentioned that?) so it’s so annoying to talk to him because I can never hear him.  And yet, we’ve made all of that work too.

He works long hours and is gone on military related duty frequently.  That seems to be what makes our marriage work.  This week, however, he is on vacation and I have been reminded that we drive each other nuts sometimes.

It’s hard because on the one hand, we don’t always have much time to spend together so vacation time is awesome.  On the other, we both maintain entirely different routines.  It can often feel like readjusting to being together after a deployment.  And while I understand that he wasn’t deployed, he was just at work, it’s challenging in any situation and relationship to try to meld to completely opposite routines.

I find that while he’s home, he drives me crazy.  He never loads his dishes in the dishwasher and loves to leave trails of clothes all over the house.  Even as I’m typing I am looking at two shirts that have been tossed onto a dining room chair.  When he’s at work, I can spend the morning picking up after him and then spend the rest of my day on other things.  But not when he’s home.  It’s a constant battle to keep the house picked up.

We love to spend time together and miss each other when my husband is off working his long hours.  We just have a hard time finding things we both want to do.  I often joke that I love my husband; I just don’t like him very much.  While I adore him in every way, he drives me nuts in a way that only he can.  But I also always say that we are prefect for each other because no one else in their right mind would marry either one of us.