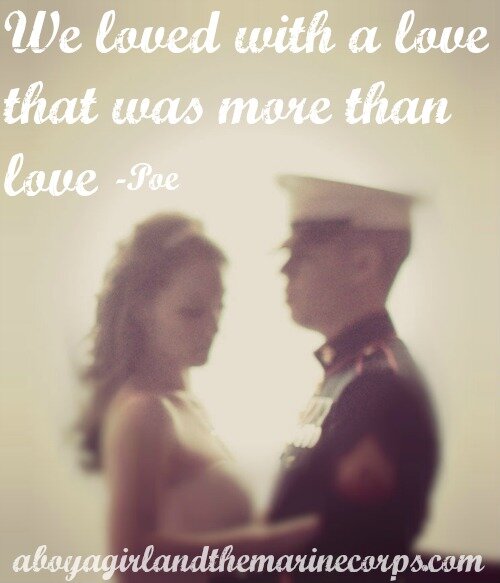 In the time that I have been with my husband, he has only deployed once.  He has had extended training missions, but only the one deployment, shortly after we were married.  I remember when we were dating I didn’t really understand what it was like to be in love with someone in the military.  We were in our early 20s, and so much of our life seemed so normal.  We did normal couple things and spent time with our friends.  But then I did the normal “new love” thing and asked, “How long do you think you could be away from me?”  To which he replied, “Well, at a minimum, two weeks.”  Shocked, I asked, “Why two weeks?”  And he replied, “Because that is how long AT is each summer.”

That was that.  That moment defined something that, at 22 years old, never occurred to me was definable.  At 22 years old, you ask your new love how long you think you can be parted and they are supposed to say, “Not a single day.”  But our love was different.  We didn’t have single days to be apart.  We had weeks, we had months, we had a whole year.

Of course, in that moment, we didn’t know we were going to say goodbye for an entire year.  We didn’t even know we would get married.  But as time passed and we became more sure of each other, the ever looming thought of time apart, separated by oceans and duty seemed to grow with a fury.  And I didn’t understand.

He shared pictures from his first deployment.  He told me stories; I met his bunk mate and his wife.  I went to my first ball, I met more Marines, I met more spouses, and the life we were going to have together took a more definite shape.  He was a Marine.  It wasn’t a romantic ideal of a man in uniform.  He was a Marine.  He was deployed to combat zones, he took fire on occasion, his life was in danger.  And I loved him.  That is the truth of this life.  It isn’t a romantic ideal, it is fraught with stress and “see you soons” that are really goodbyes.

We have always had a very open communication style, the two of us.  And one thing I have always longed to hear more about, but also wished we would never speak of again, are my husbands deployments.  The burden of knowledge is great and it means that I do not live in a world where he might just be sitting on base not doing anything for a year.  I know what he is doing.  I know what can happen in a year.  I know that we say “see you soon,” because we are afraid to truly say goodbye.  I’m not terribly superstitious, but I fear the things I might say or do that will tempt fate.  I say see you soon because fate has never been a friend of mine.

And so, as a new bride, barely unpacked in my new home with my new puppy, I said “see you soon,” to my new husband.  And it was awful.  We did not kiss romantically through windows on a bus or have deep meaningful hugs goodbye.  We said goodbye thirty times before they left.  Each time being told that they were really boarding the bus this time, and each time being lied to as they found new things that were missing from their gear.  By the time it was over, it was a relief to see him sitting near the window on the bus, really leaving.  I didn’t have another “see you soon” left in me.  My tears could no longer remain silent and the year ahead seemed like an impossible amount of time to pass.

My last look at my husband was through a dingy window.  The charter bus owner had not bothered to wash the exterior prior to coming to pick up the boys.  Maybe he didn’t understand where they were being taken.  Maybe he didn’t care.  But even if he did, it probably never occurred to him that the last look we would ever get of our husbands would be forever tainted by the grime on the widows.  I still picture my husbands face through that dirty window.  I spent a year having only the memory of him through that window, slightly fogged.  It is not imaginable to most civilians what that feels like.

And so I said goodbye, see you soon, with a final wave to a man whose features I could scarcely make out.  I used my imagination to fill in the placement of his nose in relation to his eyes, his lips in relation to his chin.  It had not occurred to me to try to memorize his features before he stepped onto the bus.  It had not occurred to me to measure the length of his gait, the way he stands when talking to me as opposed to one of his men, the subtle way he talks a little softer when gesturing in my direction.  I was not accustomed to being a military wife, I had never experienced a deployment, and in the moment of watching the bus leave the parking lot, I realized all that I had to learn.  I realized that my final memory might be of my husbands face, obscured by infinite layers of dirt, waving goodbye after saying, “See you soon.”

13 thoughts on “When “See You Soon” Really Means Goodbye”