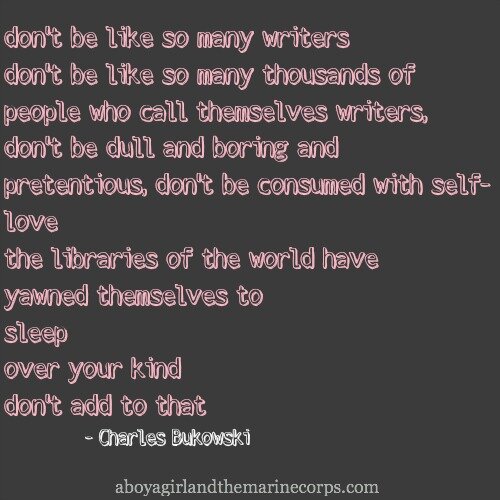 Recently, my editor shared with my an article about Charles Bukowski, an author I was unfamiliar with.  The article talked about his writing “routine.”  Much like mine, it involves staying up late, sleeping even later, messing about, and a general lack of structure.  I do not sit and stare at my computer, urging words to come.  I write when  I have something to say and when I don’t, I don’t.

I have never successfully kept an editorial calendar like so many of my counterparts.  I have never planned content in advance.  Even after I’ve written something, it can sit on my computer for months (even years) before I feel it is the right time to publish it.  Sometimes things get scheduled and rescheduled over and over as I try to find the right fit with my mood, my thoughts and my life.  Sometimes, posts can be rescheduled out of their relevance, constantly moving around my calendar until the post no longer applies to my life and then it sits in my drafts folder in purgatory.

While exploring Bukowski’s writing and who he is, I stumbled upon a poem he wrote about being a writer.  It is a bit different than other author’s advice.  He doesn’t support writing for writings sakes.  He comes from a place much like I have felt I have and I fell instantly in love with his words.

so you want to be a writer

if you have to wait for it to roar out of
you,
then wait patiently.
if it never does roar out of you,
do something else.

if you first have to read it to your wife
or your girlfriend or your boyfriend
or your parents or to anybody at all,
you’re not ready.

don’t be like so many writers,
don’t be like so many thousands of
people who call themselves writers,
don’t be dull and boring and
pretentious, don’t be consumed with self-
love.
the libraries of the world have
yawned themselves to
sleep
over your kind.
don’t add to that.
don’t do it.
unless it comes out of
your soul like a rocket,
unless being still would
drive you to madness or
suicide or murder,
don’t do it.
unless the sun inside you is
burning your gut,
don’t do it.

when it is truly time,
and if you have been chosen,
it will do it by
itself and it will keep on doing it
until you die or it dies in you.

there is no other way.

and there never was.