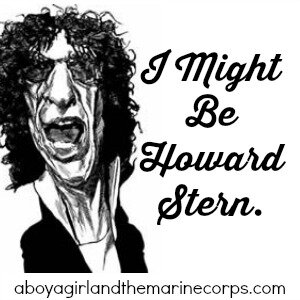 About a year ago, I decided it was high time to let all my lovely readers see my true colors.  I had previously reserved snarky posts as guest posts for other bloggers who were interested in it, but rarely posted snarky stuff on my own site.  Then I created a Facebook fan page and it became my outlet for snarky comments, rude things I say and a lovely collection of hilarious memes I find online…

And thus, A Girl, snarky blogger extraordinaire was born.

Here’s what I’ve noticed since then:

A few years ago I read an article that was all about the Howard Stern show.  Admittedly, I’ve never actually listened to his show, but I really don’t care about him or what he has to say.  This article, however, cited some research survey that said that more than half of Howard Sterns listeners don’t actually like him, they simply tune in to see what he will say next.

So, more than 50% of the people who listen to the worlds rudest shock jock do so simply to be offended.  Do they like being offended?  Who knows.  I personally subscribe to the belief that if I don’t like what you have to say, no one is forcing me to listen.  This goes for TV shows, books, you name it.  I see no reason to fight the powers at be to get you off the airwaves.  The loss of my demographic will do that on it’s own.

But in light off these funny number trends and my knowledge that Howard Stern makes the bulk of his money off of people who actually hate him, I have to wonder if I’m not the Howard Stern of milspouse blogging…

I find it hard to believe that that many people in this world are as big an Ahole as I am.  I also can’t believe that that many of you are reclusive hermits who hate the world, people and everything else in creation.  Though I’ll admit, that I tell myself you all think I’m as hilarious as I think I am and that you all agree with the ridiculous things I have to say.

I’m not delusional.  Well, I’m not delusional about this or my blog (but possibly am about other things).  I know some people hate me.  I have seen a mass exodus happen on my fan page, Twitter or even my blog, because of something I’ve posted.  But given how many of you tune in to my rude things, it can really be only one of two reasons:

Either you are all secretly like me and I give a voice to your inner snark, which is what I would like to believe

I’m betting I’m Howard Stern, though feel free to tell me that it’s because I’m awesome and you all secretly wish you could say rude things so freely too.