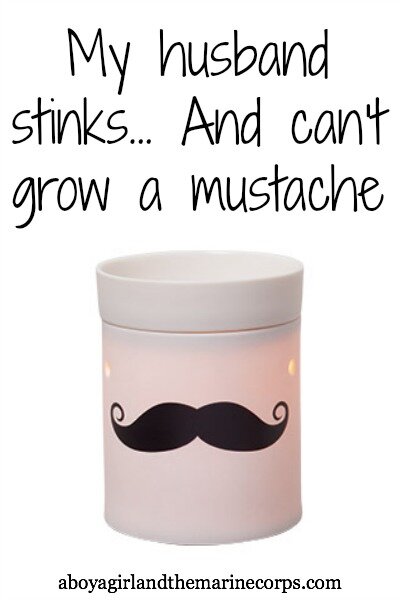 So, few months back a friend asked me if I’d like to help her promote her new Scentsy thing.  Me?  I’d heard of it, but didn’t actually know what it was.  Frankly, I was so dumb that I had to email her and ask her how it works.  Are they electric?  What the crap is a warmer?  And what’s with the weird bars of wax?

She was both kind and patient and answered my questions and I picked a warmer that I thought was gorgeous, it matched my bathroom, and I just KNEW that my husband would hate it.  Not that that is a necessity, but it helps keep him from stealing my stuff.

I’m very sensitive to scents and get migraines from them easily, but Sarah helped me pick ones that she thought would be mild enough.  Sadly, one was a no go before I even opened it.  One was FANTASTIC and the one I bought to make my fancy little bathroom feel like a spa when I take baths was never used.  Why?

Because my husband stinks. 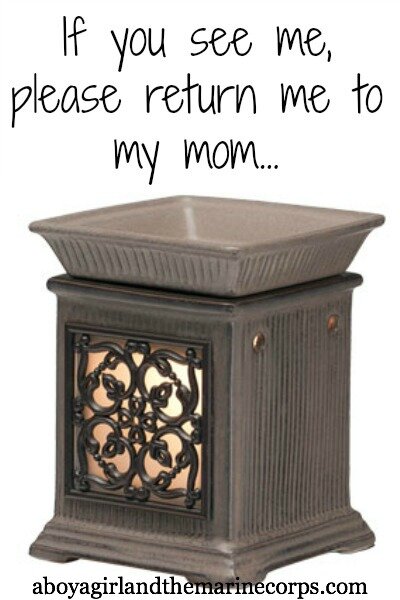 This it both literally and figuratively.  He stinks because he’s a smelly boy and worse, a stinky Marine.  BUT, he also stole the warmer out of my bathroom and plugged it in downstairs.  He runs it nearly 24 hours a day.  I’m constantly walking behind him and turning it off because I don’t think it does any good to run it while the windows are open and the fan is going.  Seriously.

I was debating if I wanted to get another warmer for the bathroom since he clearly isn’t going to give it back.  (Every time I move it upstairs, it’s mysteriously downstairs again the next day.)  Then, just the other day, he walks up to me and says, “You know, I wouldn’t be opposed to getting another one of these scent thingys from your friend.  They’re ok.”

So, now I’m eyeing this beauty, available until August.  I’m pretty sure he won’t steal this one because he thinks my mustache love is stupid… I think he’s just jealous because he can’t grow one. 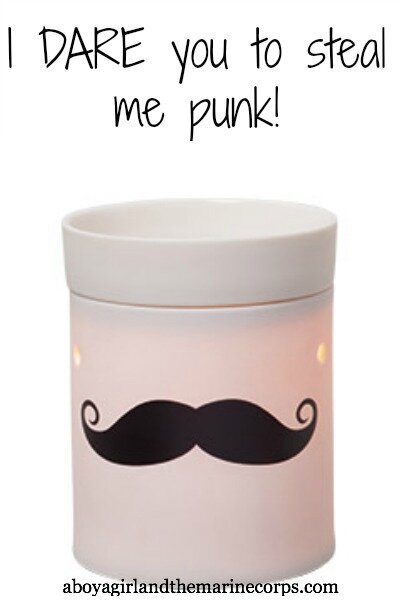 But, after years of ignoring Scentsy invites and a general dislike of direct sales type stuff, I have to admit, I’m a believer!!!  The bars last a long time, like impressively long, especially considering my husband has it on all the time! And someday in the far off dreamy future, I’ll get that warmer back in my bathroom for a private spa day… I think.  Maybe. If he doesn’t steal it.

My pal Sarah’s a pretty awesome person in general, so I seriously think you should all run out and buy stuff from her RIGHT NOW! Or at the very least, contact her about a show.