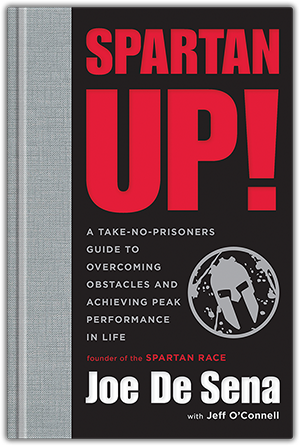 It might seem odd to have me, of all people, review a book written by the guy who started the Spartan Race. Truth be told, I’ve worked repeated with these guys over the last year. Why? Because prior to eight months ago, I was a runner. I ran the Tough Mudder and chronicled my journey right here on this blog. In fact, I was supposed to run the Spartan Race in just a few months. Things sure change quickly, don’t they?

But, regardless of my ability to run or not, I am, in my heart, the very person this book was written for. I am the girl who thought I couldn’t do it, but wanted to so badly. And many of you may remember that I had my share of naysayers who told me I couldn’t do it. But I did.

Now, I will admit that I’m still two chapters from the end of this book. But I came across a single sentence that was so beyond inspirational, true, and that spoke to me so very strongly in my current circumstance that I couldn’t help but stop and write my review RIGHT NOW.

“I realized in that moment how precious health really is.” – Joe De Sena

I often look back and regret how many days I was lazy and decided not to run or made excuses. I look at my current situation and realize how important diet and movement have been for my recovery. Sometimes, it all has to be taken away for you to realize just how precious health is. And how quickly it can be taken away.

I have highlighted a number of passages that I wanted to include in my review that I felt really encompassed this book. But nothing came close to how hard that sentence hit me today while I was riding my new stationary bike. It is the very thing I have been trying to explain to my husband, my friends, my followers, everyone who encourages me, but even more so, those who don’t understand why I keep trying.

I have a rare form of arthritis and most recently was graced with another blow from the universe: osteonecrosis. Not only is my body attacking my joints, but my bone is dying and they don’t have an answer for either. Both may randomly go into remission, or neither can and I can struggle to walk for the rest of my life. There is no telling.

But, regardless of the limitations my doctors give me, I move on as if I didn’t hear them. They can only speak from statistics and I can speak for myself.

Joe De Sena might very well be my new hero. He is everything I thought I was on my way to becoming. A badass chick that runs crazy races and whom her friends just shake their head at her insanity to do so. But he is so much more than I ever thought I could be and is inspiring me through his words.

I read the first chapter of Spartan Up! and said, “Yes, I can get behind this guy.” But soon I found that I began to read the book while I rode my fake bike (the pedal only system I bought to help with my PT and my knee movement). And soon that wasn’t good enough. He inspired me to ask my husband for a REAL stationary bike. To take my PT to the next level. To keep pushing past what even I think I can do.

This man had his hip torn from its socket in a car crash. But he didn’t take the doctors word for it that he would never run again. He asked questions, researched and educated himself. He still runs to this day and never gave up.

I remember the day I read that story in the book. I was riding to a doctor’s appointment later with my husband and I told him the story. I then informed him that I would run again. I won’t “try” I WILL. It might not be in the way I envision it. I might not get my 12 miles a week or my love of 6 miles runs back, but somehow I will run. Even if just half a mile. And if I have to move my love of running to biking so be it.

Spartan Up!, more than I expected it to, changed how I see myself. It reminded me that we can do so much more than we think. A lesson I had learned in the Tough Mudder, but apparently needed the founder of the Spartan Race to drill into my head.

I read reviews that accused this book of being a long commercial for the race. I disagree. The guy created the race, so it’s safe to assume a book named after the term he coined for those awesome Spartan runners would discuss the race at length. For me, his discussion was to show the WHY not just the how of the races. And he explains so much more! From nutrition to mental mindset, I spend every minute reading and shaking my head while mentally shouting, “YES! That! YES 100%!!!”

His views might not be for everyone, but they truly hit home and touched me in a way I didn’t think they would.

I honestly can’t wait to write him a letter letting him know how his book touched me and how awesome I feel after having run my first Spartan race, after the doctors told me I’d never run again.

If you’d like to buy a copy, consider buying it through my affiliate link! It helps support this blog 🙂