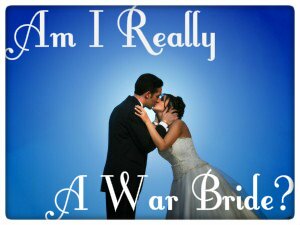 Technically, a war bride is a woman that a service member meets and marries while fighting a war overseas.   I’m an Asian American who married a Marine during war time, so I think that is close enough to count.

I guess the reason the term war bride resonates with me is the very idea that I married a man because of war.  Don’t get me wrong, we were in love and would have likely gotten married even if we weren’t a country at war, but we married in the race against a deployment.  To me, it makes me the new definition of a war bride.  And there are so many of us.

Think of how many military spouses out there met and married their service members during this conflict.  It’s hard to not meet the criteria of my new definition when this war has lasted over 10 years.  So what does that mean for all of us War Brides?

This new generation is not met with the same stigmas that the previous War Brides were met with.  In the 20s and 40s, the idea of marrying someone you met while fighting a war also meant that you were marrying someone our nation considered the enemy.  Those women were met with fierce stereotypes and prejudice.  But, today’s War Brides are looked at as a strong group of women who can handle just about anything thrown their way.

I recall being a brand new military spouse and looking with awe at those who had been married much longer than I had.  I wanted to look like them.  Cool on the outside, calm on the inside, handling everything with grace.  Of course, we all know that when no one is looking we take our turns falling apart.  Heck, I do it in the general view of the public via my blog.  But, when you look at the articles written about us, and the public perception, we are the strong silent type.

I truly hope that that will be our generation’s legacy.  Every generation has its own war.  Every generation faces it’s definition of what a War Bride is and what it means to be one.  I hope that our generation will be looked at as War Brides: women who married for love in the midst of an international conflict and did so with grace, dignity, our own identities, and the awe inspiring knack for handling whatever is thrown at her with perfectly styled hair and not a trace of (visible) stress in sight.  That we will be recognized as being so much more than just a military spouse.  We War Brides are the newest generation of military spouses and we have fought to be heard, to be recognized as individuals separate from the military lifestyle we lead and to put a human face to the perception of what we are supposed to be.