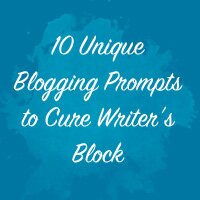 List posts are really popular. I know I love a good Top 10 or some other arbitrarily numbered thing to write a list about. But even though I love them, I absolutely SUCK at writing them. I wrote one once about my top 12 blogging pet peeves and it just sounded mean. I know I was kind of joking, but sarcasm is so hard to convey in writing and, frankly, I don’t need the hate mail from those of you who insist on putting music on your blogs.

But I really want to have a post that lists stuff. REALLY REALLY A LOT. So, I’ve conspired via Twitter with my newest blogging buddy The Classy Zipperhead and decided to write a list of writing prompts. This is really just a list of things I think would be awesome and hilarious to read on someone’s blog. I’ve decided to call them “Unique” because I really want unsuspecting people to pin this post and then come back months later to actually look at the link and discover that my list includes things like Ninja Cats.

So there you have it folks. That would be my completely ridiculous, but also hilarious and awesome blogging prompts.

You’re Welcome! (Don’t worry, you’ll thank me later when you become struck with a crippling case of writers block and find this list, filed away under “Ridiculous Things to Immediately Forget,” is the only thing that cures your ailment.)