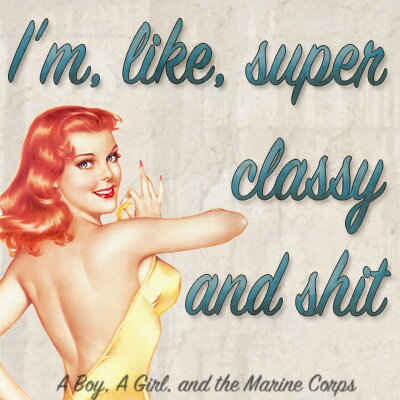 I have a variety of phrases I use in real life that I rarely use on my FB page or here on the blog.  Mostly because not only do I swear like a Marine, I also invent my own profanity.  Most people think the things I say are funny, but I’m aware that not everyone who reads my blog or who marries a Marine has the dirty mind, foul mouth and vulgar sense of humor I do.

ALL that said, I thought I would share some of my favorite things to say in real life and their definitions.  Keep in mind that these will be some of the more tame things I say, but those with sensitivities to awesome new swear words should stop reading HERE.  And those who are easily offended should stop reading HERE.  And the rest of you foul-brained suckers can commence with the laughing.