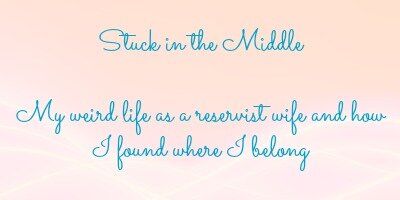 This was the second guest post I had ever written.  It was featured on Cammo Style Love as part of a series.  I was so nervous to submit it and was sure she would email me back and tell me she didn’t want it.  Instead, it’s passed the test of time as a post that many still refer to when they contact me.
To view the original post CLICK HERE.
***
I sat down to write and nothing came to me.  How is being a reserve wife different?  How is our life affected by being a reserve family?  Is there a difference at all between reserve life and active duty life?
Let’s start with the most common question I get asked.  We’ll start with the very basics.  How is my marriage affected by my husband’s military service?  Then the inevitable, “Oh.  Is that different than if he were active duty?”   Yes, I suppose it is.  But would a civilian know the difference?  Probably not.  The main difference I find myself explaining is that I do not PCS.  Ok, so I use the word “move” but it’s because my friends give me blank stares when I speak military.  Heck, I still stare blankly at my husband when he speaks military and I’ve been with him for 6 years and married for four.  But no, I do not PCS.  Ever.
The other main difference in our life is that my husband has two jobs.  Every morning he wakes up, gets dressed and drives to his civilian job and talks with his civilian friends and does his civilian things.  Then he comes home, says hello with a wink and a kiss on the cheek and immediately turns on his computer and begins the military side of his day.  He has word to disseminate, he has emails to read and respond to, this Marine or that Marine needs this or that.  He has this call to make, he has this checklist to edit.  In actuality, he usually comes home and winks at me and kisses me on the cheek in lieu of a verbal hello because he’s talking to a Marine.  I know the a lot of wives say their husbands mistress is the military, heck, I’ve said it, but the truth of our life is that I am the mistress because my husband was married to the USMC long before he met me.
We have a constant battle in our life.  I call it the “Why? Battle”.  Why was I left alone in the ER when a bookcase fell on me and we thought my arm was broken?  Why isn’t my husband home?  Why are we broke again?  Why isn’t The Boy here today?  Why did I RSVP for just one?  It’s a battle with my husband and everyone we know.   The reason is because we live a civilian style life.  We own a home, we both have civilian jobs that are not military related and we have NO military neighbors.  I don’t even live near another military spouse from our unit, the nearest one to me is over an hour away.  Most are 3 or more.  By all outward appearances, my husband’s only dead giveaway to being a Marine is the hair cut and his impeccable posture.  But our internal life is very military.
My husband and I didn’t spend our first anniversary together until our third year of marriage.  He almost always misses my birthday and every other major life event.  He hasn’t met more than half of my family (or has only met them once… at our wedding) because he NEVER makes it to any sort of family function.  We constantly don’t get paid when we are supposed to for his service, he deploys, and nearly every inch of spare space we have in our Townhome is used to store his gear and various other things he’s acquired in 10 years of service.  The bulk of our good friends are people he’s served with, or still does.  More than 70% of my FB friends are Marines and spouses.  And, for the most part, we see the same unique challenges standard in military life.

Some key differences are, we don’t get a uniform allowance, or anything of the kind.  We only qualify for Tricare when he is activated, there are not many, if any, groups that will help us when the military screws us over and, sadly, we are often not accepted by many people in the military community.

I often feel like we are in a strange place of limbo.  The military thinks the hubs civilian job should make up for all that we don’t qualify for, his civilian job (and mine) seem to think we have some secret access to all the money in the world through his military service.  I often find myself very, very, very, VERY jealous of active duty spouses.  You’re probably laughing at that.  I think I would if I wasn’t in my situation.  I don’t PCS every 2 years, I don’t say goodbye to my support system and have to build another one quickly.  I don’t have to find a new favorite restaurant that serves my comfort food when the hubs is gone.   Those things are all true, more true than I care to admit.  But the reality of my life is that I don’t have a support system, I have a house and three dogs when my husband is deployed.  And that is it.
I think that is probably the most unique challenge to reserve life VS active duty or simply being a civilian.  We are caught in the middle somewhere.  We often get treated like we are not military, but civilians definitely do not understand our life at all. And because of this middle ground we stand on, I don’t have a solid support structure.  My civilian friends do not have any clue what I’m going through.  But I don’t have a base full of other spouses, or even a community of military families to look to either.   When my husband deployed shortly after our wedding, I was lost.  There I was, in a new house and town, just me and my new puppy.  When you don’t have solid access to the support you need, you become independent, as ANY military spouse can tell you.  But what do you do when that independent life you are leading also means, you have absolutely no one in it that can even try to empathize?  I learned to navigate Tricare on my own.  The military base near me has nothing to offer when it comes to help regarding benefits.  I found out the hard way… Well, honestly, EVERYTHING.  What I wouldn’t have given to have had someone to turn to and say, “Well, geesh, today just sucks, just because,” and have them be able to read my mind as to why.  And when I wanted to punch civilians in the face for being insensitive or just simply not understanding, I would have loved someone to turn to and say, “Really!?” And have them be able to laugh and say, “You get used to it.”
Instead, my best friend, who I did volunteer work for, fired me the day I kissed my husband for the last time and watch him board a bus that would take him to the plane that would fly him to his station in Iraq.  The reason?  Because I told her I couldn’t make a few phone calls because I was stressed.  When I asked her to understand why, she told me she couldn’t possibly, because her husband wasn’t deployed.  Not only did my heart break, but it was that moment that I realized what it meant to be a reserve wife, caught in the middle of two worlds.
I feel very fortunate to have found blogging, which I had never even heard of until a month before the husband left.  I started a blog, not caring if anyone other than me ever read it.  I poured my heart out into an online super secret, super public journal. I’m positive that I was laughed at constantly, but I was also understood.  The follies of being a new military spouse navigating this strange world on my own and stumbling constantly on the way were, in no doubt, sadly hysterical, but I also found kindred spirits in the spouses of people I’d never met.  I found a world where it didn’t matter if I was reserve or active duty, what mattered was that I was a military spouse.
In my day to day, I feel stuck in the middle, trying to find a balance between two very different worlds, neither of which feel I am wholly a part of it, but when I’m in the milspouse blogging community, I’m just a millie. I’m just A Girl, who loves A Boy, who is married to the Marine Corps.

One thought on “Greatest Hits: Stuck In the Middle”