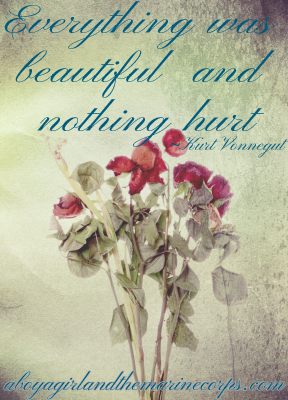 There are not many things in military life that are taboo.  This life means that we make friends fast, get married even faster, have families young, and rarely shy away from politics.  In this life, injury and death are not uncommon to talk about, because we all know someone who came home injured, or not at all.   There are a lot of things that get discussed in a military marriage that most find uncomfortable.  Before I had even walked down the aisle, I knew my husband’s last wishes, where he wanted to be buried, what kind of funeral he wanted, and whom he would choose to eulogize him.  Within our first month of marriage, he had drafted a will and I had a life insurance policy taken out on me just in case something happened while he was gone.

These are not topics that most newlyweds discuss.

But one thing that has remained a topic rarely discussed is what happens when they come home and things are not perfect.  There are things we spouses have to accept.  Some of them never come home.  Some come home, but only in body.  But what about those who come home and the gap that was spread like a chasm between them and their spouse is insurmountable?

A year ago, I wrote openly about our struggles.  Two years ago I lamented that we just couldn’t seem to reconnect.  And three years ago was the first time that I learned I was not alone.

And yet, I made people uncomfortable with my honesty.  I received hate mail.  I was told that I was the problem.  I was a bad wife and terrible American.  I was called ungrateful because I was open about the difficulty we faced making our lives come back together.  I was told that everyone judged me, because I was alone in this struggle.  But I wasn’t.  But a year ago, I buried those struggles and chose to show the world that brave face that they have come to expect from military spouses.  We who never falter in our faithfulness, we who never question staying,; we who can hold together any life, no matter how broken it may be.

A year ago, our life was fractured.  The very foundation of who we were was fractured, fissured, and I was unsure of who we would be on the other side.  Sometimes, I still am.  Because not everyone comes home and back together so easily.  Because everyday, I look at my life and am never quite sure how I got here.  Because a year ago, I told my husband I would wait for him, come what may and I meant it.

A year ago I was a girl, who loved a boy who was more Marine than husband. And I still am.  I love a Marine who will never be anything else.  And our life is nowhere near perfect and I don’t know if it ever can be again.  And I think people need to know that.  It’s not a topic most want to read about, but it’s something that is important to understand.  I love my husband and a year ago, people told me that that love wasn’t enough because we weren’t meant to be if we couldn’t come back together after a deployment.

A year ago, I buried who I was because I didn’t want to be her anymore.  But I am.  But it is not all that I am any more than being a military spouse is all that I am.  But not everyone comes back together so easily.