This lovely poem was submitted to me by the FABULOUS Jen over at Marine Wife, Mommy Life.  I’m so glad she thought to share this with me and all of you.  I hope you enjoy

I had a friend message me this poem to share on my FB page. It is far too long for a status and far too perfect to simply post as one! This poem says it all!
What do you think? 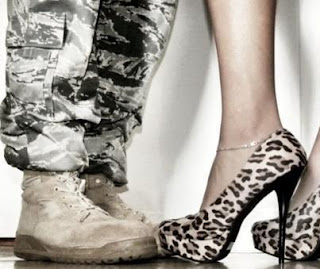 From the Author:
I wrote this polyphonal reading (i.e. “many voices”) while stationed
in Minot, North Dakota for a wives’Induction Ceremony. Every line is
inspired by real Air Force Wives who, along with other military spouses,
are a breed of their own. We don’t all want to be “married to the
military,” but we are, defacto, and no matter how involved or not we are
in “his” world there is much we have in common.
To the spouses who are men, my apologies for leaving you out of this
piece. Your own sacrifices include ours plus some, and we are grateful
for your brave and humble presence among us.
The piece is designed to be read by four ladies, reader’s theater
style. The form reflects the delightful variety among Military Wives as
well as the spirit of cooperation and community that binds them together.
If you aren’t military, I hope it gives you a window into our lives,
and inspires you to reach out to that new neighbor who is “just
temporary.” You will be richer for it.  ~Jane
What is A Military Wife?
By Jane Hubbard Hyde~2005
What is a Military Wife
A Military wife can be tough to describe.
She is a southern belle,
a Northeastern Mets fan,
a California 3rd generation recycler,
a Pacific Islander.
She is short or tall
a tomboy
a fashion diva
a physician’s assistant
a Republican
a Democrat (yes, even THAT!)
A Military Wife is a career gal
a home-schooler
a scrap-booker
an accomplished cellist
an auto mechanic
So many
many
many kinds
What is a MILITARY Wife?
They may look different
and each is wonderfully unique
But they have THIS all in common.
lots of moving—
moving,
moving,
moving far from home
moving two cars,
3 kids and 1 dog
-all riding with HER of course
moving sofas to basements
because they won’t go in THIS house
moving curtains that won’t fit
moving jobs and certifications and professional development hours
moving away from friends
moving toward new friends
moving her most important luggage;
her trunk-full of memories
often waiting-
waiting,
waiting,
waiting for housing;
waiting for orders;
waiting for deployment;
waiting for reunion;
waiting for phones calls;
waiting for the new curtains to arrive;
waiting for him to come home
for dinner -AGAIN!
They call her “military dependent”, but she knows better
she can balance a checkbook
handle the yard work
fix a noisy toilet.
She is intimately familiar with drywall anchors, and toggle bolts.
She can file the taxes,
sell a house,
buy a car,
or set up a move,
–all with ONE Power of Attorney.
She welcomes neighbors that don’t welcome her.
Reinvents her career with every PCS;
locates a house in the desert,
the arctic,
or the deep south
and learns to call them all “home”.
She MAKES them all home.
She is fiercely IN-dependent.
Military Wives are somewhat hasty
They leap into decorating,
leadership,
volunteering,
career alternatives,
churches
and friendships.
They don’t have 15 years to get to know people.
Their roots are short but flexible.
They plant annuals for themselves
And perennials for those who come after them.
Military Wives quickly learn to value each other.
They connect over coffee,
rely on the spouse-network
accept offers of friendship and favors
and record addresses in pencil.
ALL Military Wives have a common bond.
The Military Wife has a husband unlike other husbands
his commitment is unique
He doesn’t have a job, he has a “mission”
he can’t just decide to quit
he’s on-call for his country 24/7
but for you, he’s the most
UNreliable guy in town!
His language is foreign
TDY
PCS
OPR
ACC
BDU
And so, a Military Wife is a translator
for her family and his.
She is the long-distance link to keep them informed,
the glue that holds them together.
The Military Wife has her moments—
She wants to wring his neck,
dye his uniform pink,
and refuse to move to Siberia.
But she pulls herself together.
Give her a few days
a travel brochure
a long hot bath
a pledge to the flag
and a wedding picture,
And she goes.
She packs.
She moves.

She will remain his Military wife.

3 thoughts on “What Is A Military Wife?”