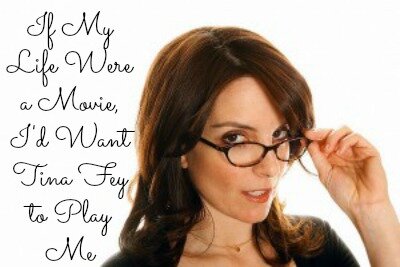 I originally wrote this post and submitted it as a guest post to my very good friend over at The Robertson Clan.  I then featured it on my own blog as part of my Funny Deployment Stories Series.
If My Life Were a Movie, I’d Want Tina Fey to Play Me (as featured on The Roberston Clan) To view the Deployment Series post CLICK HERE

***
I often feel like my life has been a comedy of errors, a cautionary tale if you will. Each step I take seems to be designed to teach me a life lesson that would have been easier to learn through a well thought out warning from someone else… But I guess there must always be the “someone” who learns the hard way so that others don’t have to.  I just wish that it wasn’t always me, or so it feels.
I’ve decided, at this point so far into my military spouse life, that I might as well start taking my sad, and almost pitiful luck, and turn it into something useful.  I mean, as a fellow milspouse blogger and friend told me recently, if it wasn’t for bad luck, I wouldn’t have no luck at all.
When I first became a military girlfriend, I knew almost nothing about the Marine Corps.  I didn’t even know how to spell “corps.” That is not a joke, but feel free to laugh hardily at that.  For all my book smarts and good grades in school, I severely lacked any true knowledge about military life save what I saw in the old “Be all you can be” Army ads.  For all I knew, Marines really did climb mountains and fight fire demons (you may or may not remember that ad as well).  So, when it came to dating a Marine, it all felt very glamorous.  I was the girlfriend of a handsome Marine.
When we got married and he deployed shortly after, that glamorous world turned in the real life of a newly wed spouse to a deployed Marine… That life is not only NOT glamorous, but I might have been a tad pathetic… Just a tad.  Or a lot, depending on how long you have been married to your service member, and how many deployments you have been through.  Being a reserve wife, I’m not anywhere near a single other spouse from the unit, so I took to blogging to vent. It’s true, I found out very quickly that there was a whole community of milspouse bloggers that I didn’t know existed, but I’m pretty sure most of them read my blog purely out of the joy of laughing at the sadly hysterical follies of a new spouse finding her way on her own.
I look back at that time in my life with a half smile.  I’m horrified at the overly weepy gal I was.  But hey, I knew nothing about how to navigate the military as a spouse and had to learn on a very steep learning curve.  I was strong, but not as strong as I am now.  And I know so much more about how to get what I need out of the military than I did then, but even now, I have my panic stricken moments filled with terror and fear when something unexpected goes wrong…  then I write a blog post about what I learned and turn myself back into that darn old cautionary tale. Such is my life.
So, I will share with you one of my heartbreakingly hilarious stories from my deployment and will tell you your life lesson of the day- I ask you to picture Tina Fey as me in this moment for the absolute best effect.
My husband was deployed at the time and I had not heard from him for a number of days.  No word at all.  So, I’m sitting in my sweats feeling particularly freaked out that day, minding my own business of watching TV to occupy my time, when the doorbell rang.  Panic filled my heart.  I was not expecting anyone today!  And if I’m not expecting anyone, then that doorbell can only mean one thing…
I burst into hysterical tears as I answered the door.
The look on the Fed Ex delivery man’s face was beyond uncomfortable, and, I might add, priceless.
I can only imagine what must have been going through this poor mans mind when a disheveled, hysterical young woman came to the door when all he wanted to do was deliver a box.  And he must have been utterly confused by the look of shear relief that came over my face when I realized it was just the Fed Ex guy.
So, the life lesson of today is two fold.  1. Don’t wear sweats, skip showering and mope about the house after you have ordered something online and are awaiting a delivery while your husband is deployed.  2. Maybe explain to the poor guy why you were sobbing, instead of just sniffling while signing for the package and then shutting the door on the poor confused mans face.
Now, wasn’t that much funnier,and less pathetic, when it was Tina Fey, instead of me?